My new book is out!  Thinking Queerly:  Medievalism, Wizardry and Neurodiversity in Young Adult Texts is available from the Medieval Institute Press at Western Michigan University.  This focuses on the history of the wizard as a queer, neurodivergent figure, and how they re-appear in young-adult novels as transgressive characters.  Purchase a copy at a discount here, or from Bookshop, or Powell’s.

I have a new creative nonfiction piece in Strange Horizons about fantasy computer games, the early internet, and growing up on the spectrum in a small town.  Check it out here.

I gave a talk, entitled “Queer Magic:  Wizardry and Neurodiversity in Fantasy Studies,” as part of the Out on the Prairie speaker series at the University of Regina.  We chatted about cranky wizards, nonbinary angels, and some medievalist YA fantasy texts.

On March 12th, 6pm CST, I’ll be hosting a keynote roundtable with poets Courtney Bates Hardy and Tea Gerbeza, as part of the University of Regina Department of English’s annual conference on pop culture–Trash Talkin.   We’ll start with a reading, and then discuss mental health, disability, and creative writing.  Click here to register for this free Zoom event, and here for the poster!

I’m on an episode of the Harry Potter podcast Witch, Please, hosted by Hannah McGregor and Marcelle Kosman, where we talk about disability, ableism, and neurodiversity in the HP series (particularly in Chamber of Secrets).  Check it out here.

I’ve got a new poem published in Eclectica Magazine.  It’s called “Another New York Poem,” and features roaches, cats, and the unicorn tapestries.  Check it out, along with the rest of the issue!

I’ve got a new poem in the January 2021 issue of @GhostCityPress‘s Ghost City Review–check it out along with other great poetry from contributors. It’s an extremely 90s-feeling poem featuring Tori Amos, Sailor Moon, and Magic: The Gathering.

I have a new poem, “Sleepover,” in The Puritan Literary Review.  Check it out here, along with the rest of the contributors!

I have a new piece in @lareviewofbooks on neurodiversity in YA lit and pop culture–check it out here.  I discuss shows like Atypical and Everything’s Gonna Be Okay, as well as some contemporary YA texts.

I have a new poem in Eunoia Review:  “How to Stay Gay in Quarantine.”  Check it out here

I have a short piece on craft and characterization in the latest issue of WordWorks by @bcwriters There are neat articles by Pat Dobie, Michelle Barker, and Faye Arcand. Thanks to Ursula Vaira for putting this together!  Access it here

I’ve published two accessible pieces on academic hiring and the job market:  How to Survive the Academic Job Market, and Surviving Academic Interviews.  Both focus on ableism in the academy and challenges to diverse hiring, as well as strategies for hiring and interviewing.

The Faculty of Arts Research site at the University of Regina has re-posted my essay on queerness and the spectrum–now it counts as research!

I published an essay on Medium about queerness, the spectrum, and Schitt’s Creek.

I have a chapter on queer meals, “Schitt’s Creek,” and coffee culture in Canadian Culinary Imaginations, a forthcoming volume edited by Shelley Boyd and Dorothy Barenscott.  Pre-order a copy from McGill-Queen’s University Press.

I have a new poem in the final issue of Poetry is Dead (“Small Towns”).  It’s a lovely collection of poems on small towns in Canada, from Penticton to Peterborough.

Order an issue now because this is their very last one!

My piece on medieval eunuchs in Game of Thrones is out with The Public Medievalist! It deals with the medieval gender spectrum, Varys being a boss, and other historical eunuch warriors. Also some Byzantine work on loving/accepting eunuch citizens.

I gave an interactive proseminar on self-care and how to survive grad studies.  Here are the slides + Twitter conversations that influenced the discussion.  Here are my lecture notes as well.

I published two articles (one co-authored) on the rainbow crosswalk debates in Chilliwack and Regina.  I’m happy with how these turned out!  Jacq Brasseur was kind enough to co-author the Carillon piece and their words are powerful.

I have a new article in the journal Mosaic, on anxiety in the work of 17thc philosopher and dramatist Margaret Cavendish.  Check it out here:

Abstract:  “This essay will discuss the role of social anxiety in the work of Margaret Cavendish, with a particular emphasis on blushing, speechlessness, and what we would now call introversion. The bashfulness that she presents in her work as a “crimeless defect,” I will argue, is both a form of transgressive modesty and a reaction against environmental sensitivity. In plays such as Lady Contemplation, The Presence, and Love’s Adventures, Cavendish is interested in staging various failures of communication.”

This is fun–my first book, Blood Relations:  Chosen Families in Buffy the Vampire Slayer and Angel, has been profiled in a Wiki article/video:  “10 Nerd-Friendly Books Examining Popular Media.”  Check out McFarland’s other great titles in pop culture as well!

I attended the International Medieval Congress at Leeds–highlights included getting to hold a falcon (!), visiting York Abbey with a fierce crew of academics, and attending excellent panels on the medieval mind, medieval skin, and saints.  I presented on medievalism in The Chilling Adventures of Sabrina, linking the title character with the enchantress Morgan le Fay.  Check out the paper here: Dangerous Minds

I attended the meeting of the Canadian Society of Medievalists at Congress2019–delivered a paper on medievalism and convention culture (read it here:  queer medievalist markets) as well as an excellent roundtable on combating white supremacy in medieval studies.  There was also a fun manuscript workshop at UBC’s special collections!

I attended the International Congress on Medieval Studies and participated in a roundtable on problems in medieval studies, sponsored by The Lone Medievalist.  There were excellent discussions about anti-racist pedagogy (including the IMC’s troubled relationship with Medievalists of Color), and my own talk focused on medieval poetry and mental health/neurodiversity in the classroom.  I also participated in a panel on medievalism in children’s literature, and delivered a paper on medievalism in Rainbow Rowell’s Carry On.  You can read it here:  Kzoo_Wizard_Paper.

I have a new poem in the most recent issue of The Maynard!  It’s all about breaking bones and hearts!

Heya fellow medievalists and fantasy-enthusiasts.  I’ll be attending 2 medieval conferences in the new year.  From May 9-12 I’ll be at the International Congress on Medieval Studies at the University of Western Michigan in Kalamazoo.  I’ll be presenting a paper on medievalism on YA literature, and I’ll also be part of a roundtable focused on problems within the discipline.  From July 1-4 I’ll be at the IMC in Leeds, presenting on “dangerous wizards” in young-adult texts.  Feel free to find me if you’re at either of these events!  Coffee, chatter, and “oohing” over medieval books is always welcome.

I reviewed a forthcoming collaborative book–Autoethnography and Feminist Theory at the Water’s Edge:  Unsettled Islands.  Edited by Sonja Boon, Lesley Butler, and Daze Jeffries, and forthcoming from Palgrave Press.  An excellent mix of creative/critical essays from an elemental perspective, including discussion of trans and nonbinary identities in a Canadian context.

Tonight at 6:30 PM I’m doing an interview on Regina’s CJTR Community Radio [for their Just Drawn That Way podcast]–we’ll be chatting about my recent class on Buffy the Vampire Slayer.  Feel free to have a listen here.

I’m giving a seminar on New Directions in Medieval Studies as part of the University of Regina Department of English’s Proseminar Series.  We’ll discuss ecologies, medievalism(s), and disability studies, as well as what Medieval Studies can offer!  Click here for a larger version of the poster. 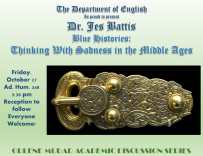 I delivered a talk on Old English literature and disability studies, entitled “Blue Histories:  Thinking With Sadness in the Middle Ages,” as part of the Orlene Murad series at the University of Regina.  Afterwards we discussed medieval representations of the body, and how medieval literature may represent a challenge to current narratives of cure (see Eli Clare’s wonderful work on this in Brilliant Imperfection).

Click Omad_pdf for a larger version of the poster.

I wrote a blurb for Ken Mondschein’s Game of Thrones and the Medieval Art of War, published by McFarland Press (who also published Mastering the Game of Thrones).  If you have burning questions about Valyrian steel or just want to know more about medieval arms and armour, check it out!

I’m teaching a Chaucer course in the Fall, which focuses on Chaucerian fantasy and the supernatural:  from sorcerers to zombies.  We’ll also look at medieval adaptations like Game of Thrones, and our various shared fantasies about the medieval era.  Click here to check out the poster.

Next month I’ll be part of a panel on Old English Elegies at the 2017 International Medieval Congress in Kalamazoo.  I’m particularly excited about this panel because we’ll be talking about the role of queerness in Old English poetry, with a nod towards “queer” as something with multiple meanings:  strange, ambivalent, untranslatable.  We’ll be talking about Maxims, Beowulf, and other poems, on May 12th at 3:30.  I’ll be the guy with the cane.

I had the pleasure of participating in a roundtable discussion on adapting medieval research to genre fiction, including fantasy, YA and children’s literature.  I couldn’t have asked for two better panelists:  Kim Zarins (Sometimes We Tell the Truth) and Sandra Evans (This is Not a Werewolf Story).  We talked about how to avoid getting lost in the details, and how the academic world could be more receptive to nontraditional writing about research.

Literary Wonderlands is now available for purchase!  The book, edited by Laura Miller and including work by Lev Grossman, features gorgeous maps and detailed discussions of fantastic landscapes.  I have a piece on Game of Thrones, and I’m quite excited by the visual content.  Books like this remind us that fantasy literature is all about mapping, discovery, and adventure.  Order from IndieBound.

I have an article on eighteenth century slang and sexuality coming out in Volume 36 of Lumen, the journal of the Canadian Society for Eighteenth Century Studies.  It focuses on gay bar culture in eighteenth century London and the unique language that developed between different subcultures, eventually leading to queer dialects like Polari.

Literary Wonderlands is available for presale.  This anthology features essays on created worlds, and is wonderfully illustrated.  I have a piece on Game of Thrones, and other contributors include author  Lev Grossman, Tolkien scholar Tom Shippey, and fantasy critic Farah Mendlesohn.  The collection is edited by author Laura Miller.

Contributed a piece to Plentitude on queer YA literature.  “Lizards and Brokenhearts:  Reading in the Teenage Wasteland.”